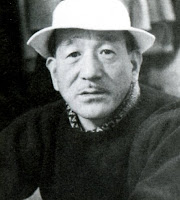 Not always something extra-ordinary happens in common people's lives. Does that mean that there is no story to tell from their lives? Why most of the movies in popular culture have to be based on some extra-ordinary people or some extra-ordinary events in ordinary people's lives? Partly because the audience wants a way out of their ordinary life through this medium, I guess; and partly because it is hard to tell ordinary stories in a compelling way. That is why even great filmmakers choose a compelling story or resort to an innovative and compelling narrative or style of film-making. But there are few who chose to tell story of ordinary people in ordinary and simple language, and Yasujiro Ozu was one of them.
Till recently my exposure to Japanese movies were limited to animes and Kurosawa. Kurosawa is great, no doubt about it - wonderful story telling and wonderful insight. But those are not stories of ordinary men. So when I came across the first of Ozu in last December, I didn't know what to expect as that was my first exposure to a movie that covers contemporary Japan. And what I found was the kind of movie I was looking for ... story of ordinary days of ordinary men in ordinary language but in an extra-ordinary movie. The movie was 'End of Summer' that marked my beginning of Ozu. Then recently I got hold the entire series of six films 'Late Ozu'. Six films centered on middle class Japanese families - their journey through love, grief, sorrow, betrayal, insecurities, and struggle. Simple stories, simple people, simple narration, yet compelling.
The six films are 'Early Spring', 'Tokyo Twilight', 'Equinox Flower', 'Late Autamn' and 'End of Summer'. In 'Early Spring', a young couple suffers through their distrust and betrayal before each other before reconciling again. Its the restlessness of early youth. 'Tokyo Twilight' chronicles the turbuelent story of an old man and his two daughters whose mother has fled with another man when they were child. The eleder sister has a fragile marriage and the yoinger is suffering from identity crisis as she is betrayed by her lover. The old father in 'Equinox Flower' is often busy in advising trouble friends and their children about romantic relationships, but can't really cope up with his own daughter's relationships. It a classic story of differences of perception of love and marriage between the father and the daughter. In 'Late Autamn' friends of a late Mr. Miwa try to arrange a suitable match for his daughter as well as Mrs. Miwa only to make things complicated in the mother and daughter's life. At the 'End of the Summer' the children of an old businessman tries to cope up with their father's illlicit affair as the father's life comes to an end.
The people in Ozu's films are simple people, most of them are salaried persons. Their relationships are all entangled. They are full of wrongs and rights. They are predictable and that is why they are "ordinary".
The way Ozu tells the stories of these people is also very simple. Mostly static shots. Camera sits in between twe person framing each of them in the center as they converse with each other. It gives an impression of just sitting in between them for the audience. All his indoor shots are taken from a low angle, as if its being seen throgh the eye of someone who is sitting on the mat. It feels as if the viewer is stting right in the room with the characters. Then the transition shots are just some static shots of some objects reflecting the mood of the film. There is nothing catchy, nothing complicated. The characters act calmly as they sort through their lives. The movies are portrayal of life as it is.
Ozu's films make you relaize, as told by one of his characters in 'Late Autamn', "Life is simple, only people make it complicated".
Posted by Somesh at 12:44 PM No comments: