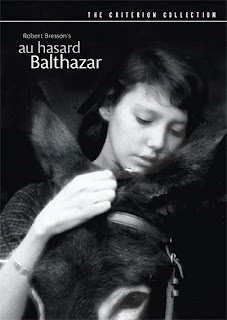 I don't know how to write about this movie, sorry cinema. I first came across this cinema in a novel titled 'Ishwarer Bagan'. The tormented protagonist sometimes while reflecting his dilemmas, agonies referred to this cinema. I was curious. I searched over it and found that this is a classic. I tried to find it out over internet if I can get it for buying. But couldn't locate any shop offering it. It was back in 2000, I guess. But I could locate a website named www.criterion.com who were offering really old classics. I asked Jon Mulvaney of Criterion whether they have it on store, but he replied that they were planning to release it in future. So I kept on lookout on their website. They released the cinema in due course but I was not in position to buy it. And finally when things all fell in place, after seven years, I finally got the DVD of 'Au Hasard Balthasar'.
Balthasar is a donkey. The movie chronicles life of Balthasar. In fact thats all this movie is about. This is just about life, real life; in a very matter-of-the-fact way. The opening shot shows little Balthasar with his mother. Then he is traded from one owner to another suffering every time. Parallel to his life follows Mary's life. Mary is teenage girl of the neighborhood. She was the only person in the movie to show some love to the donkey. But her life is also miserable. Her family loses their fortune for her boastful father, and she wanders from one owner to another suffering every time. She wanders from her father to a rowdy named Gerard then to a miser and gets exploited every time. And in the end Mary leaves Jack's fantasized love and falls for Gerard again to get totally humiliated and Balthasar dies lonely on the field surrounded by a sheepherd.
What is the most captivating about this cinema is the ample space it leaves behind. It shows the events where only Balthasar is present; in a way it shows everything through his eyes. And it shows only the facts, no emotions. Sometime it is really disturbing to watch events so emotionlessly in a matter-of-fact way. But that is reality, there is no drama in life; what we do in daily life we do simply out of reflexes, automatically. And what we follow in this cinema is lives of very common people and a donkey full with their vices and vulnerabilities. This is Bresson's style. He used to work with 'models' who had their first and may be the last appearance on screen in his cinemas. He used to shoot the same shot over and over again till all the acting is drained off from the actors and they start acting out of instinct and reflexes. And it does wonder for him. The shots come out sharp, to the point and impactful. There is no scope of sympathising with any one of this cinema.
There are many parallels of Christianity and this story. Like christening of Balthasar by three children, Mary's play with Balthasar making him wear a crown of grass and flower or the death sequence of Balthasar encircled by a sheepherd. But thats not all. Its about the daily life of ours. Its about life. And life is rough.
There are very few dialogues, some good music mostly covered by noise of the surround and often interrupted by Balthasar's braying. There are many long takes and some obscure shots showing just the eye of Balthasar or may be one leg, one half of a wheel. Its not the way we are used to see in a movie. May be thats why Bresson doesn't call his work movie, he calls it cinematograph. There is a sequence when Balthasar goes to a circus. He meets other animals. And we see long takes of Balthasar and a Tiger, a monkey, an elephant stare at each other's eyes. No sound except the background noise, but it seems so many words are conveyed between them.
This cinema leaves a lot of things not told. Becuase it shows only the things where Balthasar were present or were directly related to. It doesn't show why police were after Arnold, the tramp, or what happened between Mary and the miser at the miser's place in the raining night, or even what happened to Mary at the end, did she die or did she ran away. Bresson was asked in an inteview about the night at the miser, he answered, he too doesn't know what happened. There is nothing beyond what is shown. If you want to make a story about it you have to imagine. But the fact is whatever it might be, that doesn't change the life at all!
There are movies I loved, I liked, I hated, I felt sad about. But this is a cinema that had intrigued me greatly, confused me greatly. There is something... I just can't fathom it out!
Posted by Somesh at 5:20 PM