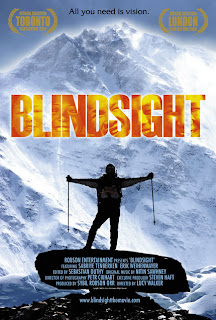 Kyila was born blind just like her two twin brothers! Her mother died early worrying about her children. Now Kyila and her brothers along with their blind father runs the house.
Tashi isn't his real name and he is not Tibetan either. He was sold to a chinese couple who brought him to Lhasa. Unable to withstand their torture, he ran away and lived a life of blind street kid before meeting Sabriye. Its been almost nine years he hasn't met his loving sister back in Schezuan province of China.
Sabriye went blind at the age of twelve. She wanted to join German Peace Corps but wasn't allowed to because of her blindness. So she traveled on her own from Germany to Tibet and with her partner Paul she established the first school for the blind in Tibet and their organization Braille Without Borders.
The list is long. But apart from blindness, do you know what is common among them?

They believe blindness is not a disability - its a personality trait.

So they, along with four other blind kids Sonam, Tenzin, Gyenshen and Dachung set out on a mission to prove that they are not less competent than any sighted person. Guided by Erik Weihenmayer, the first blind climber to defeat Mt. Everest and his team this small group of Tibetan kids and their teachers have taken a mission to make it to the summit of Lakpa Ri (23,000 ft) - a peak just at the shadow of Everest. And Sybil Robson Orr and her husband being a close friend of Erik didn't want to loose the opportunity to document it. So 'Blindsight' was born. Its a wonderfully directed and photographed documentary that captures the climbers' journey objectively without any extra sympathy or emotion. Breath-taking landscapes clearly pictures the conflict of ideas of typical notion of beauty and blindness.

Some say when you climb the top, you can see everything beneath you and that gives a whole new perspective. But what if you are blind? View from the top of the Everest or at the depth of Grand Canyon doesn't mean anything to you. Then why these blind kids try to climb up? Why does Erik attempt to scale Mt. Everest? It is not only to prove to the world that I can too. It is just like any other person - enjoy the beauty! Yes, even the blinds have a sense of beauty. The rocky paths, rope bridges, bells of yaks, chilly gusty wind, breathing in thin air, touch of ice ... all these open a new window of imagination in our mind. We the sighted persons don't really care as our imagination is totally suppressed by the visual information. But for these fellows that is vast open field of exploration. I can guess how Erik was mesmerized by the beauty of Everest when he stood on the top.

The expedition, Climbing Blind, took place in September, 2004. The kids are self-supported now. Tashi along with Tenzin runs the largest massage clinic in Lhasa. Gyenshen is the only Braille publisher in Tibet. Kyila went to UK and Dachung went to Beijing on scholarship for higher study. Both have returned and joined the blind school in Lhasa as faculty. Sonam graduated from high school with flying colors and preparing for university. She will be the first blind ever from Tibet to join any university. And Sabriye and her Braille Without Border is starting another school in Kerala, India to train both the blind and the sighted to establish similar satellite project around the world.

The documentary is inspiring and humbling. But thats not all. Surely watching six blind kids make their way to mountains is really awe-inspiring and teaches how with determination one can push the limits. But there is something more - a new perspective beyond that. It doesn't matter whether they finally made it to the summit, what matters is that they discovered themselves and made us the sighted viewers realize how narrow and blind we really are in our mentality and determination.
Posted by Somesh at 1:40 PM